Yes, walk.  We’ve heard for many years now that texting and driving can be deadly.  Now take a moment to notice how many people are using their phones while walking and not paying any attention to their surroundings.

Most states have now outlawed texting and driving in some form or another.  More and more states are going a step further by making simply talking on your cell phone illegal when driving, except for hands-free use.  Illinois has the law.  California enacted a similar law that took effect January 1st of this year (2017).  Just a few weeks ago, Iowa followed suit.  Currently, the Minnesota legislature is considering such a bill.  If passed, Minnesota would join 15 other states and Washington, D.C. that currently have a “hands free” law, according to the Insurance Institute for Highway Safety.

Driving is one thing, but many people feel it’s OK to use their cell phones while walking.  The statistics say otherwise.  A report from the Governor’s Highway Safety Association (GHSA) should be a wakeup call that we need to also address distracted walking. 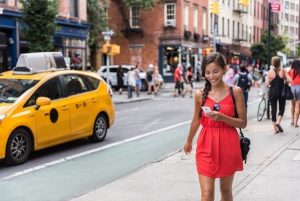 The GHSA study suggests that we are a nation of distracted drivers and distracted walkers. It is routine to see others looking at their phones while walking in hallways, on sidewalks and while crossing busy intersections. It’s also common to still see drivers talking on their cell phones, texting, eating breakfast or applying makeup while behind the wheel.

It is no secret that all of this has greatly contributed to a jump in traffic fatalities — as high as 8.1% on a national average and even more in some states.  What’s more alarming is that pedestrian deaths are increasing at the fastest rate ever recorded.

A good number of us have been guilty of this at one time or another.  But is answering a phone call or sending a text that takes your eyes off the road worth it the possible consequences?

We place extra emphasis on this issue as the weather gets warmer and more and more children are outside at play and on their bicycles.  While you are driving, just one glance at your cell phone could lead to tragedy.

Our family of lawyers at Tauber Law Offices, takes the issue of negligent drivers very seriously.  There have been too many families forever scarred by the careless use of cell phones, not to mention the continued dangers from those who are driving under the influence.

If you believe that a family member suffered serious injury or even death because of an at-fault driver of a motor vehicle, we want to hear about it as soon as possible.  There is never a charge for our work until we are able to reach a just settlement in or out of the courts.  We’ll always be at your side fighting aggressively for your rights.